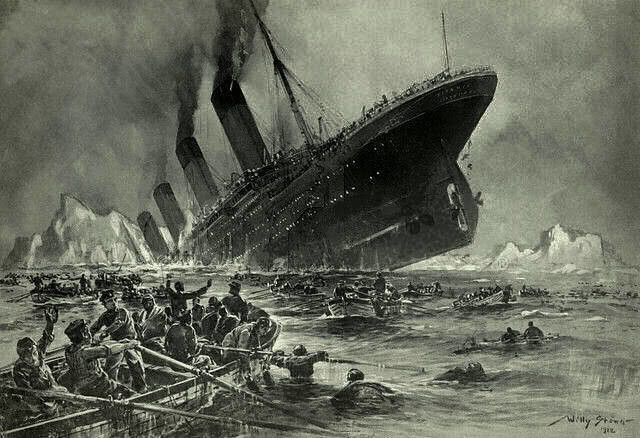 RMS Titanic was a British passenger liner that sank in the Atlantic ocean on an early morning in April 1912 after colliding with an iceberg during her maiden voyage from Southampton, UK, to New York City. The sinking resulted in the death of more than 1 500 passengers and crew, making it one of the deadliest commercial peacetime maritime disasters in modern history.

Four days into the crossing and about 600 km south of Newfoundland, the vessel hit an iceberg at around midnight on ship’s time. The captain only had 37 seconds between the “iceberg” warning launched by the lookout (who had not found the binoculars that would have improved his ability to provide early warning of the hazard) and the collision; this was insufficient to allow the ship to avoid the iceberg.

The collision caused the ship’s hull plates to buckle inwards and opened five of her sixteen watertight compartments to the sea; the ship gradually filled with water. Meanwhile, passengers and some crew members were evacuated in lifeboats, many of which were launched only partly loaded.


The Titanic was the largest passenger ship at the time, and had been built with several new technological features. The ship was famously described by its operator as “practically unsinkable”, because its hull was separated into sixteen “watertight” compartments using remotely activated watertight doors. If the hull were to be penetrated, that compartment would be closed to prevent propagation to other parts of the vessel. In the worst case, this design, and associated pumping mechanisms that evacuated water from a breach, was assumed to enable the ship to sink very slowly and allow passengers to evacuate with time to spare. However, these compartments were not really watertight, as they did not possess a roof section (making the bulkheads higher would have reduced interior space and made the ship less comfortable for passengers). When the iceberg sliced through the hull of the first six compartments, a chain reaction began of the watertight bulkhead filling up, then flooding the compartment beside it.

The ship also did not have a double hull, but only a double bottom, as a money-saving measure.

Operator hubris. The Titanic had been warned of the presence of icebergs by several ships, but did not slow down.The concept of risk homeostasis suggests that people adapt and change behaviour in reaction to changes in the level of risk to which they are exposed, so as to maintain a roughly constant exposure to perceived risk. For example, we drive more slowly when on a wet road, but also tend to drive more quickly if we know our vehicle is equipped with ABS. The Titanic was thought of as a particularly safe ship, with its semi-watertight compartments and modern radio system, which may have encouraged the captain to maintain speed despite the presence of iceberg hazards.

There were not enough lifeboats to accommodate all of those aboard, a fact which seems astonishing today but was allowed by the outdated maritime safety regulations of the time. Titanic only carried enough lifeboats for 1 178 people, slightly more than half of the number on board, and one-third her total capacity. This choice was partly due to hubris of the ship’s designers, who overestimated the effectiveness of the new technological measures implemented in the ship, and partly due to lax regulations. The ship designers may have preferred to maximize the space on deck which was accessible to the more wealthy passengers (first class tickets on this ship were extremely expensive, around 500 k€ in inflation-adjusted terms).

The crew had not been trained adequately in carrying out an evacuation.Ironically, a lifeboat drill scheduled on the morning of the collision was cancelled to allow passengers and crew the opportunity to attend a religious service.

The officers did not know how many people they could safely put aboard the lifeboats and launched many of them barely half-full.

Though the Titanic had a very modern radio system, warnings from other ships about the presence of ice (which led other ships in the area to slow down or stop) were ignored by the radio crew, partly because they were overwhelmed by the large volume of telegrams sent by the wealthy passengers, possibly also because the ship’s captain wanted to show that the ship was capable of rapid service on its maiden voyage.The shipping industry at the time was undergoing major changes, with strong competition between companies, the appearance of larger and faster ships, and the use of new routes.

Furthermore, the SOS sent by the Titanic was not heard by a nearby ship because its radio was switched off during the night.

Outdated regulations. Regulations concerning ships were at the time written by the British Board of Trade. They determined the minimum number of lifeboats based on the ship tonnage, rather than on the number of passengers. This criterion was reasonable for historical ships, but was inappropriate for the gigantic ships that were being built at the time. The new ships were also able to travel at higher speeds, and new routes involving new risks were starting to be used commercially. The board was considering whether this regulation should be changed, but shipowners had opposed the change, resisting the increased costs it would generate.

This tendency for safety regulations to be slow in reacting to technological changes, due to the inertia of regulatory authorities and to political pressure exerted by companies operating in the sector, has been seen in multiple industries and historical periods.

The accident led to a number of technical and organizational changes in maritime passenger transport that aimed to prevent a similar accident:

Several of these changes can be seen as a (long overdue!) implementation of defence in depth principles in the maritime industry.