Insurance and risk: some history

The Code of Hammurabi is a Babylonian law code dated from around 1750 BC. It consists of 282 laws dealing with all aspect of public life, citizen’s rights and obligations and the Babylonian kingdom’s justice system. The laws were inscribed on a stone stele (shown below) in honor of the king Hammurabi and on a number of clay tablets. The stele, discovered in 1901 in the south-east of Iran,The stele originally stood in Babylon (today in Iraq), but was most likely taken from there to Persia by the winner of some war.

is today exposed at the Louvre Museum in Paris. Written in cuneiform script and Akkadian language, it is one of the oldest deciphered writings of significant length in the world.

Several aspects of the code are remarkable, and quite modern:However, many aspects of the Hammurabi Codex seem rather harsh to a modern reader. In particular, the punishments listed are often quite gruesome, being “ancestors” of the “eye for an eye” principle of the Old Testament.

Risk management in the Hammurabi codex

Some laws in the Code of Hammurabi specify the professional responsibilities of builders / engineers:

This has the effect of aligning the incentives of the builder with those of the client (the future occupant), which amounts to a high likelihood that buildings are safe.It is “interesting” to contrast the situation at this time, in which a builder presumably made huge efforts to ensure that buildings were safe, with the decisions of engineers and builders that led to the use of cladding that was known to the manufacturer and to the project engineers to be highly flammable and dangerous (but cheaper than the non-flammable alternative) in the renovation of the Grenfell Tower in London that led to 72 deaths in 2017.

These laws that ensure decision-makers have “skin in the game” have been called the “best risk-management rule ever”.

Some laws cover the risks of extreme events affecting a financial loan:

Some laws cover risks related to a form of maritime insurance:

The Roman Empire, and particularly its large cities such as Rome, depended heavily on maritime trade, the only form of transport that could supply a sufficient supply of food to support a large (for the time) city population. However, shipping was a hazardous activity, with many boats lost to bad weather, technical failures and pirates. The Romans developed a maritime law that included insurance-related concepts to allow shippers to share the risk of their activity with other investors. Indeed, the concepts of risk and insurance are tightly related, and in fact in etymological terms, the term “risk” derives from the Italian word “risco”, which means “that which cuts”, and refers to reefs that could damage the hulls of cargo ships [Ewald 1991].

For instance, a shipper could finance an expedition by setting up a “loan” backed by the ship hull (a class of loans called “bottomry”). If the ship were lost at sea, the lenders would lose their money; if the ship arrived at port, the owner would pay the “resicum”, or interest on the loan. This mechanism was socially advantageous for investors, because Catholic and Muslim laws at the time forbade lenders from earning interest on any loans, but allowed this more complex arrangement. It was also advantageous to society in a broader sense, because it allowed a progressive transformation of maritime shipping (and all the subsequent benefits of trade) from a high risk, high return and low volume activity to a less riskyThe risk reduced first was the financial risk borne by investors, rather than the risk to life borne by seafearers. But by increasing the commercial importance of this risk, more money and attention became available to improve the level of safety of this activity.

Another form of collective insurance developed in the maritime domain is the “law of general average”, an ancient principle from maritime law. The idea is that if a ship’s crew is obliged to throw some cargo overboard to lighten the ship during a storm, all cargo owners will share the cost of the lost cargo, and not only the owner of the goods lost at sea.More precisely, the modern formulation of the principle is as follows: “There is a general average act when, and only when, any extraordinary sacrifice or expenditure is intentionally and reasonably made or incurred for the common safety for the purpose of preserving from peril the property involved in a common maritime adventure” (York Antwerp Rules, 2004). This language is used in freight contracts and marine insurance policies.

The underlying principle is that in an emergency, no time is available to haggle over which goods should be sacrificed to allow the ship to be saved, so a general principle needs to be established in advance, based on solidarity between all the ship stakeholders (they pay in proportion to the value of their goods at the destination port). In practice, this means that cargo owners, despite not choosing their “partners” on a cargo ship, are jointly liable for the general averages, and entrust the ship’s captain with authority on their behalf to jettison their cargo.

During the Middle Ages, tradespeople (workers specialized in a specific craft or trade, such as masons, carpenters, iron workers) were organized in organizations called guilds. The guild helped to develop the specialized technical knowledge associated with the profession, and young workers would be occupied as unpaid apprentices until they acquired sufficient skills. Each professional would pay a membership fee to the guild. If a guild member was affected by a fire or robbery, suffered a professional accident, or lived too old to work (not a very frequent “problem” in medieval times!), the guild would compensate the member or his family for the loss, a form of risk sharing that is similar to insurance. This mechanism was extended to become a general social insurance mechanism (often called “social security”) in a number of Western countries at the end of the 19th century [Ewald 1986].

Maritime insurance in the British Empire

The bottomry loans developed during the Roman times sometimes led to very high interest rates (up to 40%) to cover the risk of loss. The Catholic Church decided in the 1200s that sea loans were usurious (unethical loans that unfairly enrich the lender), and banned their use. Merchants adapted by setting up other forms of risk transfer, such as joint ventures where business risks were pooled and a dedicated marine insurance policy was established. 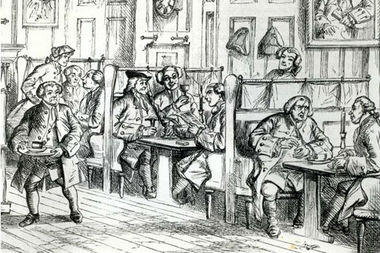 In the late 1600s, the British were increasing the amount of shipping between England and the colonies. A London coffeehouse owned by Edward Lloyd became the main meeting place for merchants and investors to discuss insurance.This coffeehouse later developed its insurance-related activity and gave its name to the large insurer Lloyd’s of London and to the Lloyd’s Register ship classification and risk assessment firm.

Merchants would present a copy of the ship’s cargo, and investors willing to cover risk of loss would sign at the bottom of the documentThis is the origin of the term “underwriting”, the act of writing under the name of the ship.

stating that they were prepared to assume a percentage of the risk.

Insurers started assuming a risk prevention role at this time, working to share knowledge of good safety practices in the maritime industry, and developing quasi-regulatory activities. For example, Lloyd’s Register popularized a technology called the plimsoll line, a reference mark on the ship’s hull indicating the maximum depth to which the vessel may be safely loaded with cargo. This helped observers check that boats arriving at ports were not overloaded.